It’s what every little girl dreams of … a marriage proposal over text message … complete with crazy Hollywood bribes and a demand that you change your crappy attitude, stat.

And that’s exactly what Floyd Mayweather fired off to Shantel Jackson back in April ’14 … according to new court docs obtained by TMZ Sports.

Jackson put the proposal on display in new legal papers filed in her nuclear war with her ex-fiancee … which shows how Floyd tried to convince Shantel into getting engaged for a 2nd time.

“This is what I offer to you. Let’s get married move in together you can go back in forth to L.A and stay at the condo.”

Shantel says she shot down the offer (shocker) … and included several text messages dating back to April 2013 to show why Mayweather wasn’t exactly her knight in shining armor.

— “I had your phone traced. I hired a detective. Your not slick.”
— “I got nasty videos too that I can put on Instagram and twitter”
— “I took you from rags to riches now you back to rags bitch. that’s why your out selling shit going on petty ass auditions fronting to people like your doing big sh*t.”

Shantel also says Floyd got upset over a photo of her with rapper Nelly from April ’14 and demanded she remove it from her social media page.

When she refused, Shantel says Floyd sent her a pic of them together in happier days with the caption, “Just tell me this didn’t mean anything.”

In the legal docs she also claims, “[Floyd] threatened that if I didn’t take down the photo of me and Nelly, he would post ‘naked photos’ of me on social media.”

BTW, Shantel and Nelly began dating … and are still together. 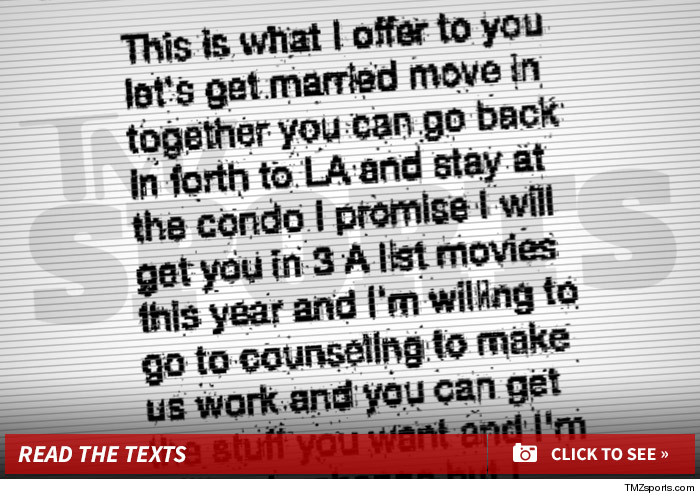 On The National Syndicated Rickey Smiley Morning Radio Show, Rock-T is the show’s sports editor. Rocky began his career as a pro baseball player with the New York Mets. Now you can see Rock-T Daily on the #1 Ranked TV Show “DISH NATION” on FOX TV. He is Founder of The Rock-T Youth Foundation which Powers STOMP WARS, The Nations #1 Rated Youth Step Competition. Rock-T is the Ambassador of Success For Teens- S.W.A.G. youth program, M.O.B. Rock-T Lives by the motto: “NO EXCUSES! GET IT DONE”!